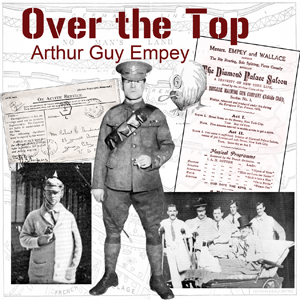 LibriVox recording of Over the Top, by Arthur Empey. Read by Mark F. Smith.

Arthur Guy Empey was an American who responded to the sinking of the Lusitania by enlisting with the British Army to fight in France. His experiences in the trenches, including his ultimate wounding and convalescence, became this book. When published in 1917, it was a major hit and helped the recruiting effort when America entered the Great War.

If you've heard of the horror of trench warfare in WWI and want to see it from below dirt level, Empey offers it all here.

Also included is Empey's popular "Tommy's Dictionary of the Trenches" which humorously demistifies the slang used by the British soldier. (Summary by Mark F. Smith)

Reviewer: FNH - favoritefavoritefavoritefavoritefavorite - December 26, 2008
Subject: Free Audio Review
The story tells of an Americans experiences in the trenches fighting for freedom amongst the British soldiers that he refers to constantly as "Tommy". It's touching to here about the bonds that form between these men in such situations and how amongst the horror and deprivation the human spirit and camaraderie shines through.

The duties of the story teller vary considerably, ranging from simple infantry man to machine gunner and even to spy-catcher. Never boring and always with some new aspect of the conflict to be revealed the narrative is detailed and bold. It's told with a real sense of wry humour that coming from such a terrifying source is heartening to hear.

The reader is an established Librivox veteran who brings a good strong voice to this very personal tale and makes the presentation a joy to listen to.

You can find more of my reviews of free audio over at http://freeaudioreview.blogspot.com/

Uploaded by librivoxbooks on December 22, 2008